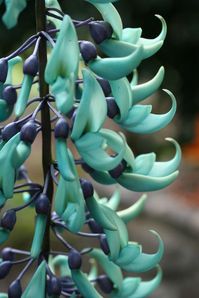 What are they?
Also know as Jade Vine, Emerald Vine, Turquoise Jade Vine or by its scientific name; Strongylodon Macrobotrys, the Green Jade Flower is a formation species of forested (woody) vine. The Green Jade's stems can reach up to a considerable 18m in length. Pollinated by bats, the Green Jade is a member of the pea and bean family.

Where are they found?
The Green Jade Flower can be located in heat absorbing forests surrounding the Philippines, with separate growth in damp/rain woodlands, ravines and the tropical islands of Asia.


Why are they threatened? How have humans contributed to this?
The rainforests of the Philippines are disappearing at an alarming rate, what once used to be covered in forest only has 20% remaining.
The Green Jade Flower specie is bordering endangerment due to farm and factory chemicals being dispersed, effecting unsustained growth and copious deforestation, exterminating it's evolution totally. These hazards have ravaged the Green Jade's encompassed flower and following, the entire species is drastically decreasing. Previously, Green Jade Flowers didn't produce seeds, indicating they were scarcely found until 1995, of late they are facing the same dilemma and we must prevent history from repeating itself over again.

How can this be helped?
To prevent the farm and factory chemicals from harming the flower's we can either commence the production of Green Jade's in alternate locations or we can enlist complex laws prohibiting mass amounts of harmful fume fabrication, we can also build green houses to start growing the flowers but to wear off the fumes from harming them. 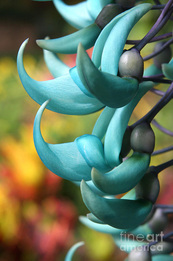 A regarding group of the status of species:
Kew Royal Botanic Gardens have gardens that display the green jade flower in the Palm House and the Princess of Wales Conservatory at Kew. Kew are researching the Green Jade Flowers biology at a great speed due to the elimination of forests in the Philippines.

Actions of individuals in response to endangerment:
Individual people have started growing the Green Jade Flower not only due to their beauty but because of the fact that they are becoming endangered. People have also started creating websites to make people more aware of the endangerment of this plant.

Actions of groups in response to endangerment:
Groups are being formed to create researches on this plant and are asking for donations to make special gardens for endangered plants, including this one and many others.

Actions of governments in response to endangerment
Governments don't seem to be doing much except adding to the problem. The government are reducing the forests for more space for houses and buildings.
Powered by